State Number 9 (Nebraska) is in the books!

When I moved to Colorado in 1988, Nebraska was the enemy!  The University of Colorado actually had some decent football teams in those days and beating Nebraska was always the goal.  Colorado didn't win many of those games and  I developed a distaste for Nebraska, even though I hadn't spent any time there. After spending the past weekend in Gering and Scottsbluff, that distaste, just like the old rivalry, is gone.  The people in Nebraska are so friendly and the Monument Half Marathon was top notch.  The expo and everything about the race was so well organized and fun.  I would definitely recommend this event and a visit to the Gering/Scottsbluff area.

On Friday, my wife and I drove 3 hours to Gering and checked into the Monument Inn and Suites. The hotel wasn't fancy but the price was right and it was real close to the race start. The highlight of the trip (other than the race) was seeing the scenery just outside Gering and visiting the Scottsbluff National Monument. The scenery is unlike anything I imagined seeing in Nebraska. 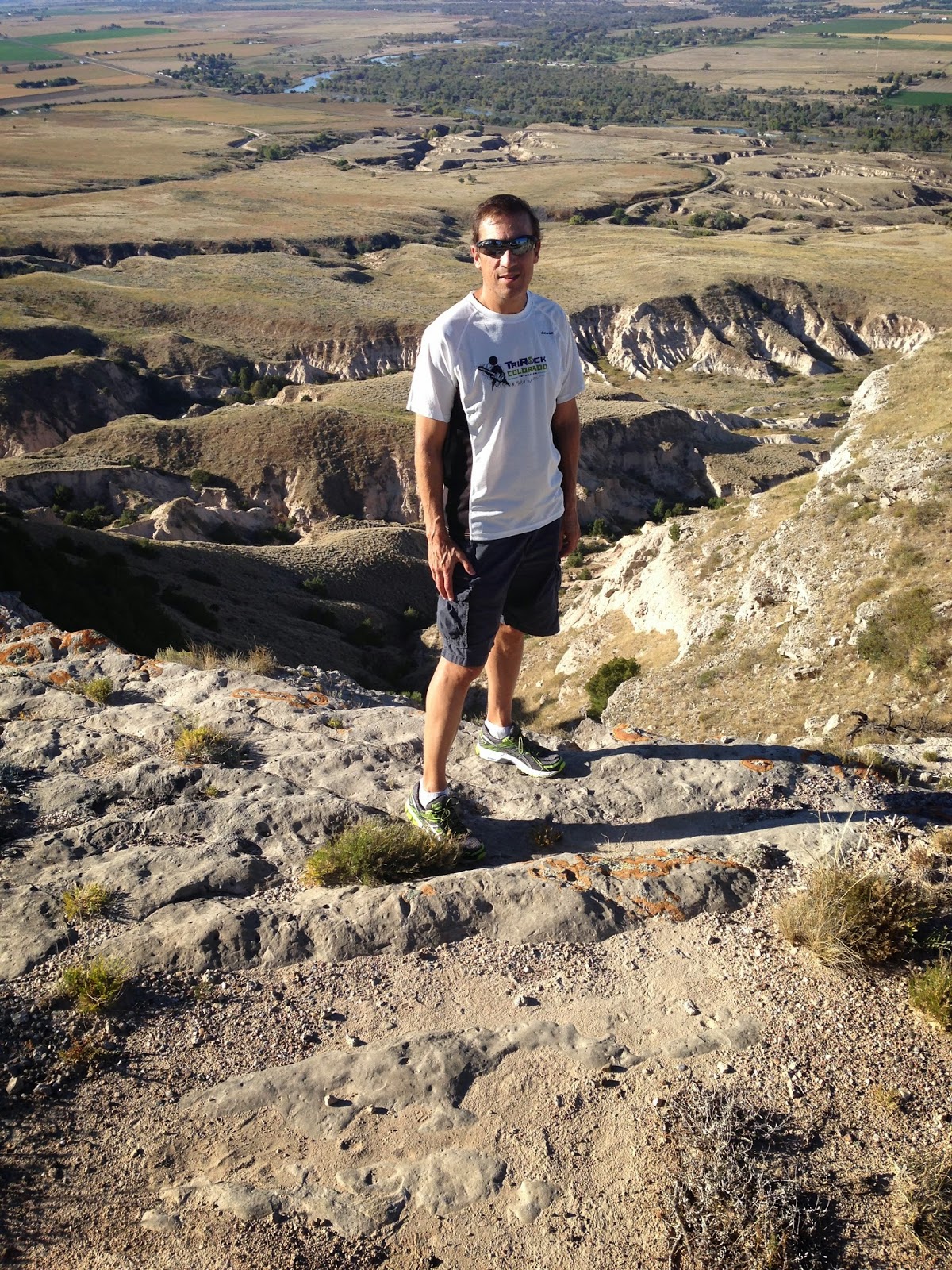 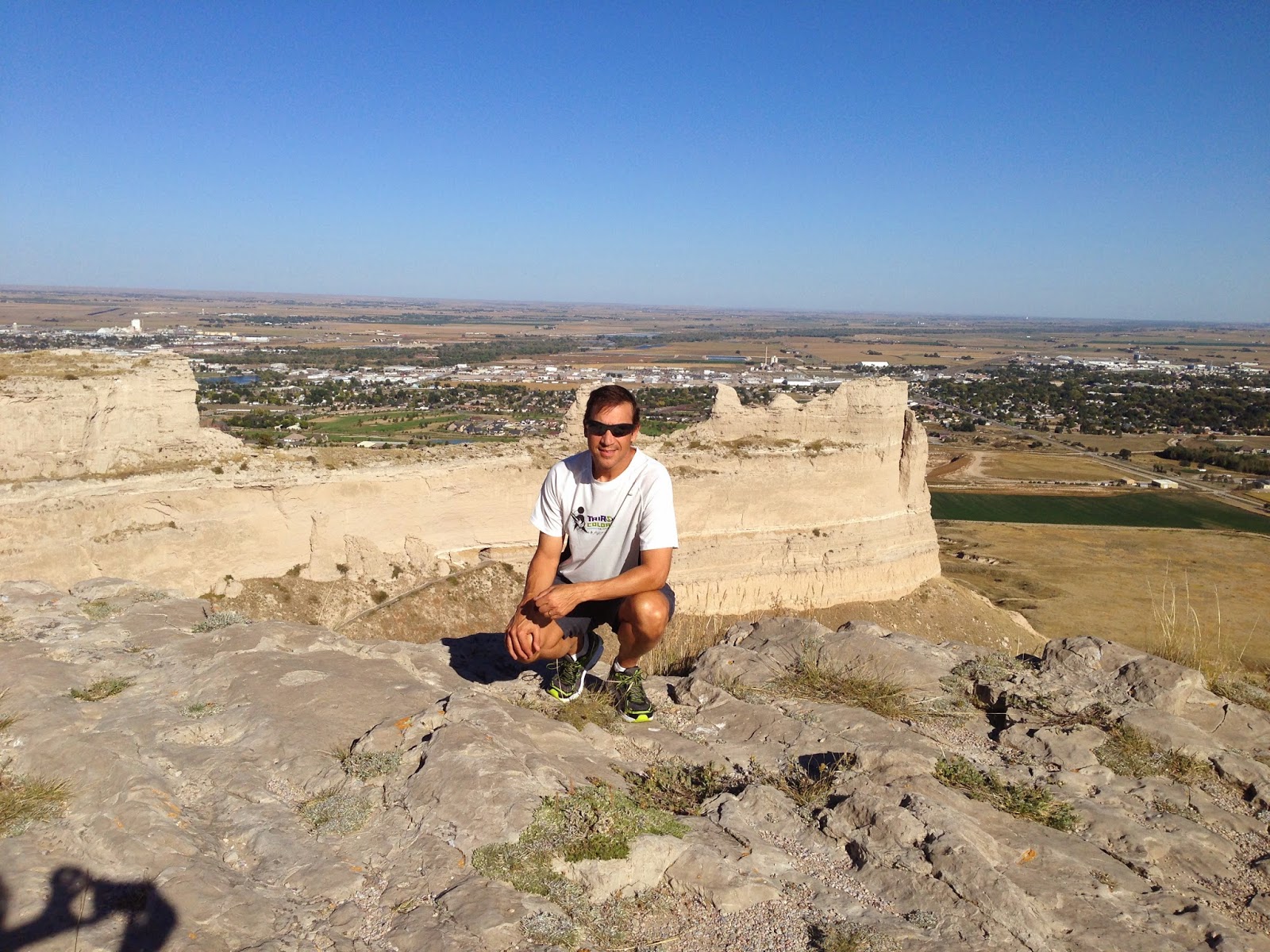 After checking in, we went to the expo which was held at a college in Scottsbluff.  The expo was small but everyone there was enthusiastic about the event and very helpful.  There were lots of giveaways at about 15 different tables.  The race was also unique in that it offered a free backpack in four different colors!  I chose red and we filled my new red backpack and headed out to see the sights. 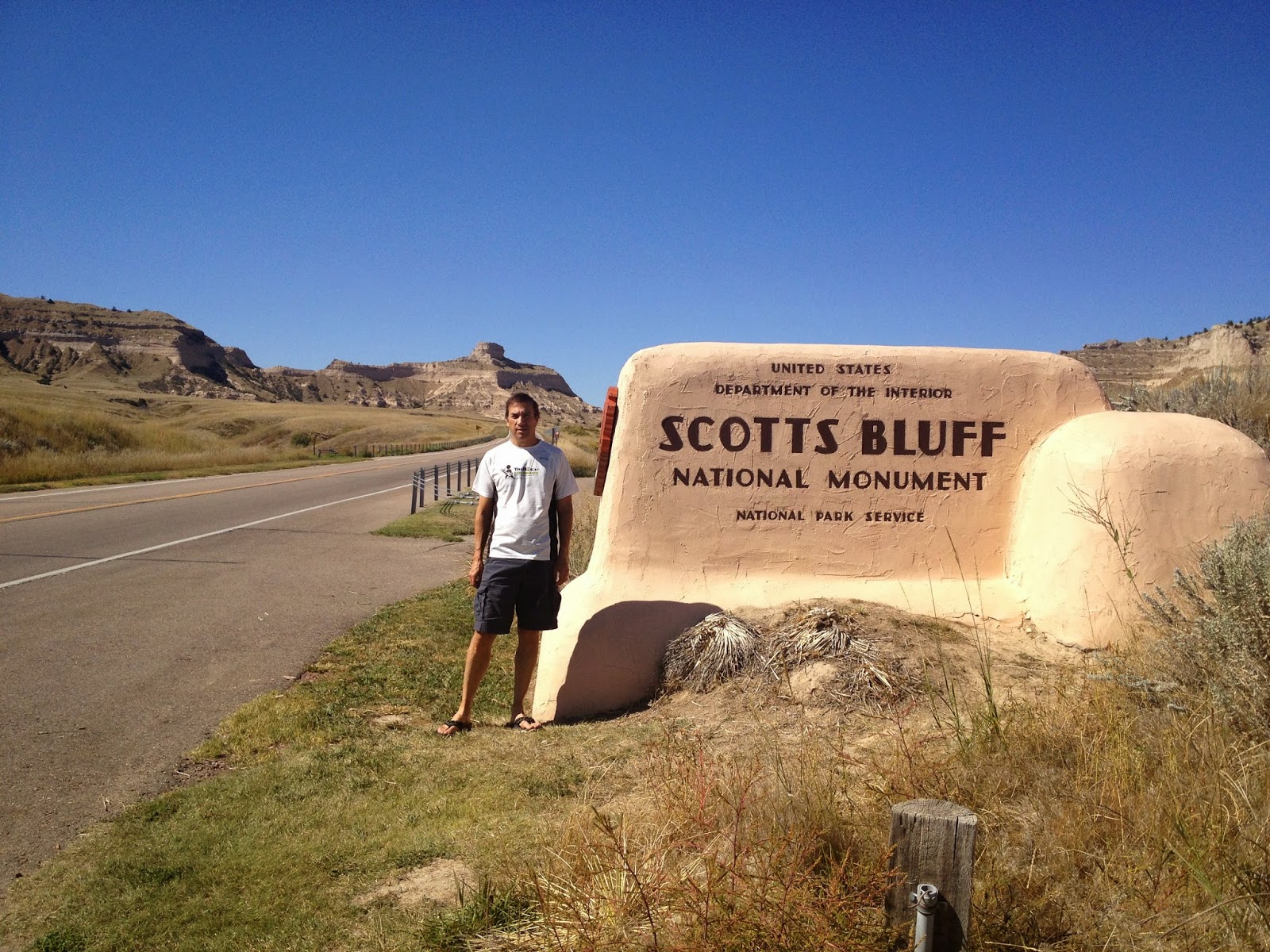 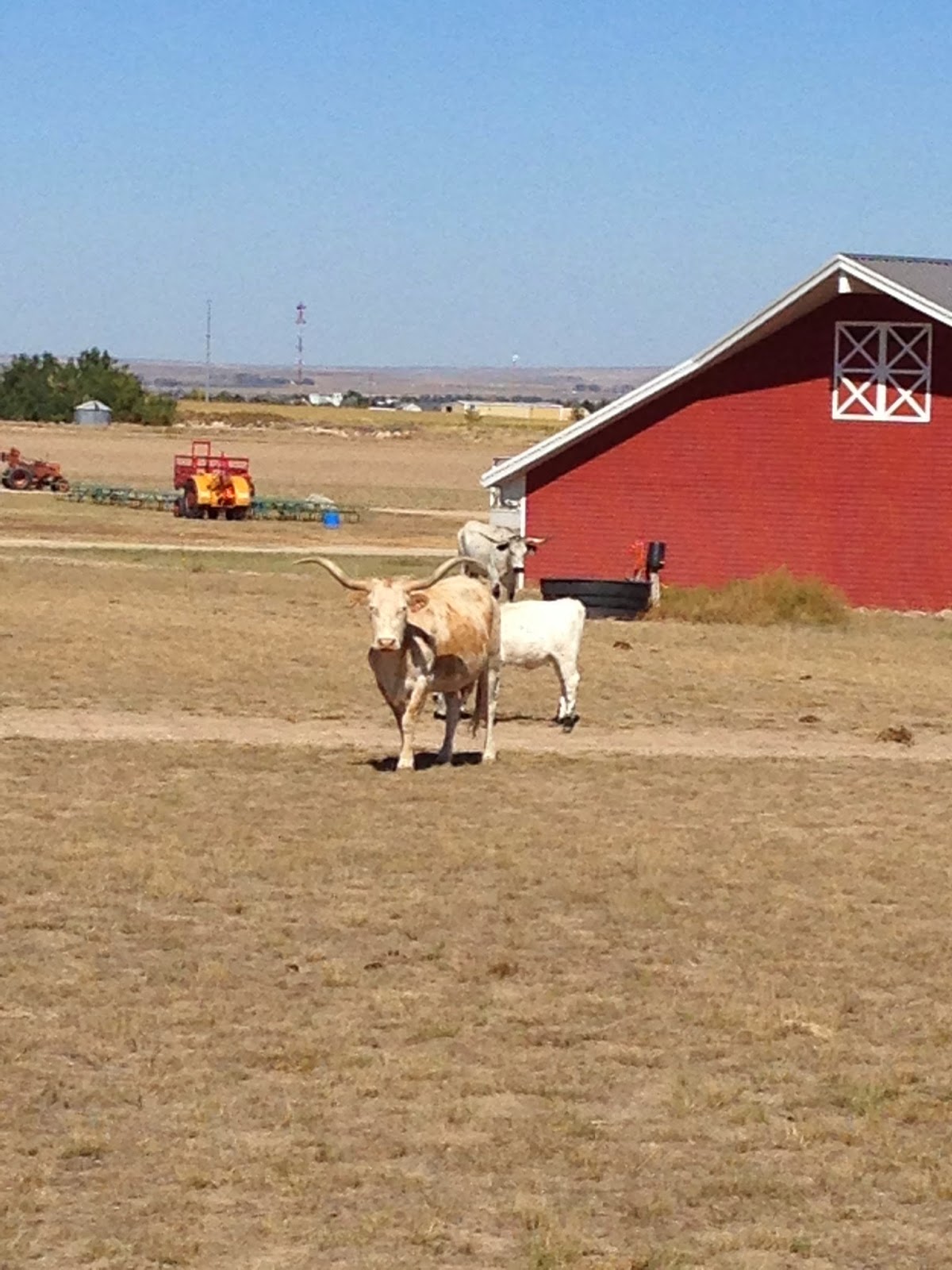 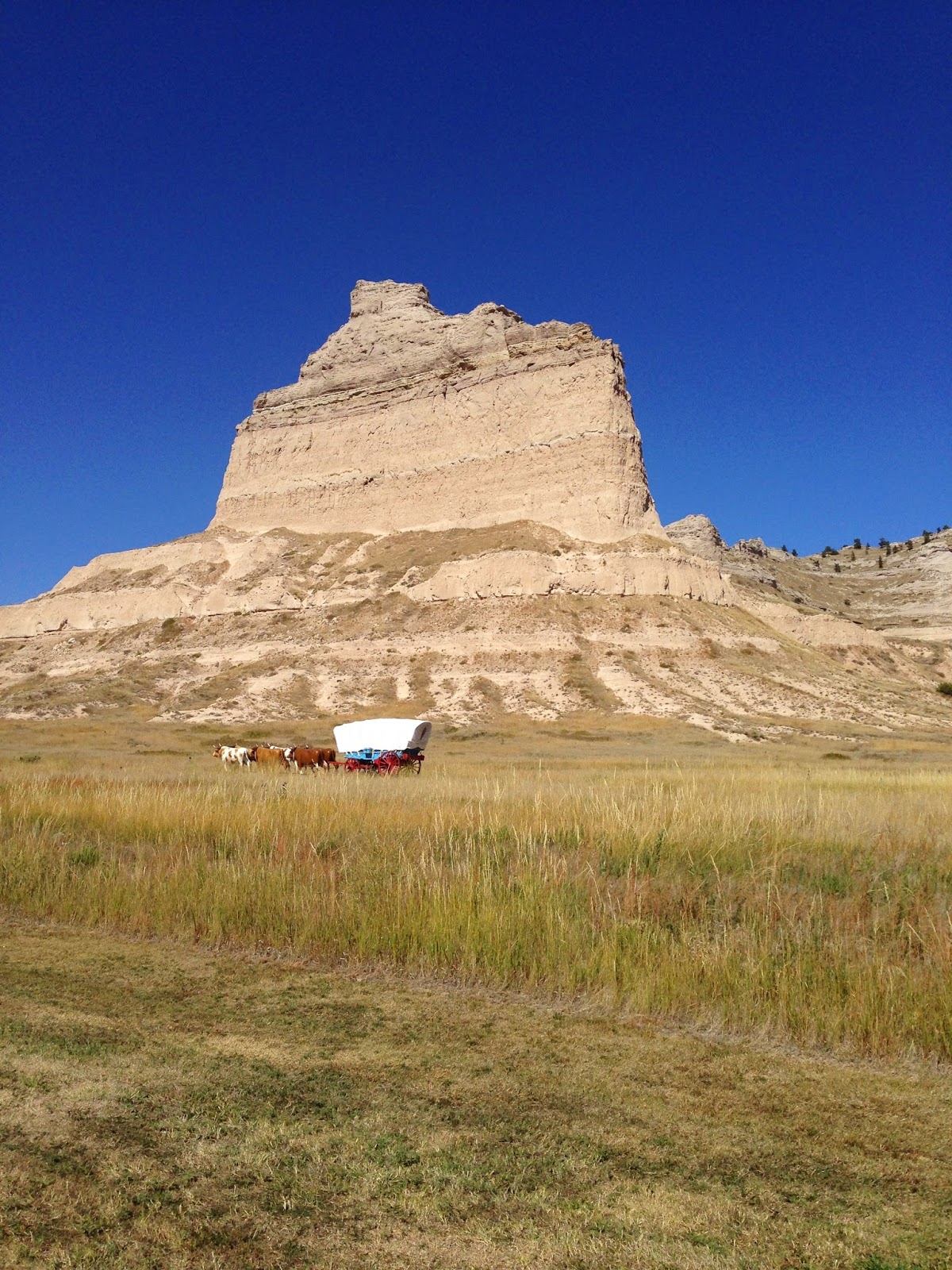 Friday evening, I broke tradition and ate dinner at Applebee's.  There was no Olive Garden restaurant  so my choices were limited. I ate my usual pre-race meal of salad, breadsticks, and pasta with chicken  After eating too much, we were back at the hotel and in bed by 9pm.  I didn't sleep great but chose to get up when the opportunity clock rang at 615am.  I'm not calling it an alarm clock because it provided me an opportunity to get up and get going. A little positive terminology I learned from Zig Ziglar. 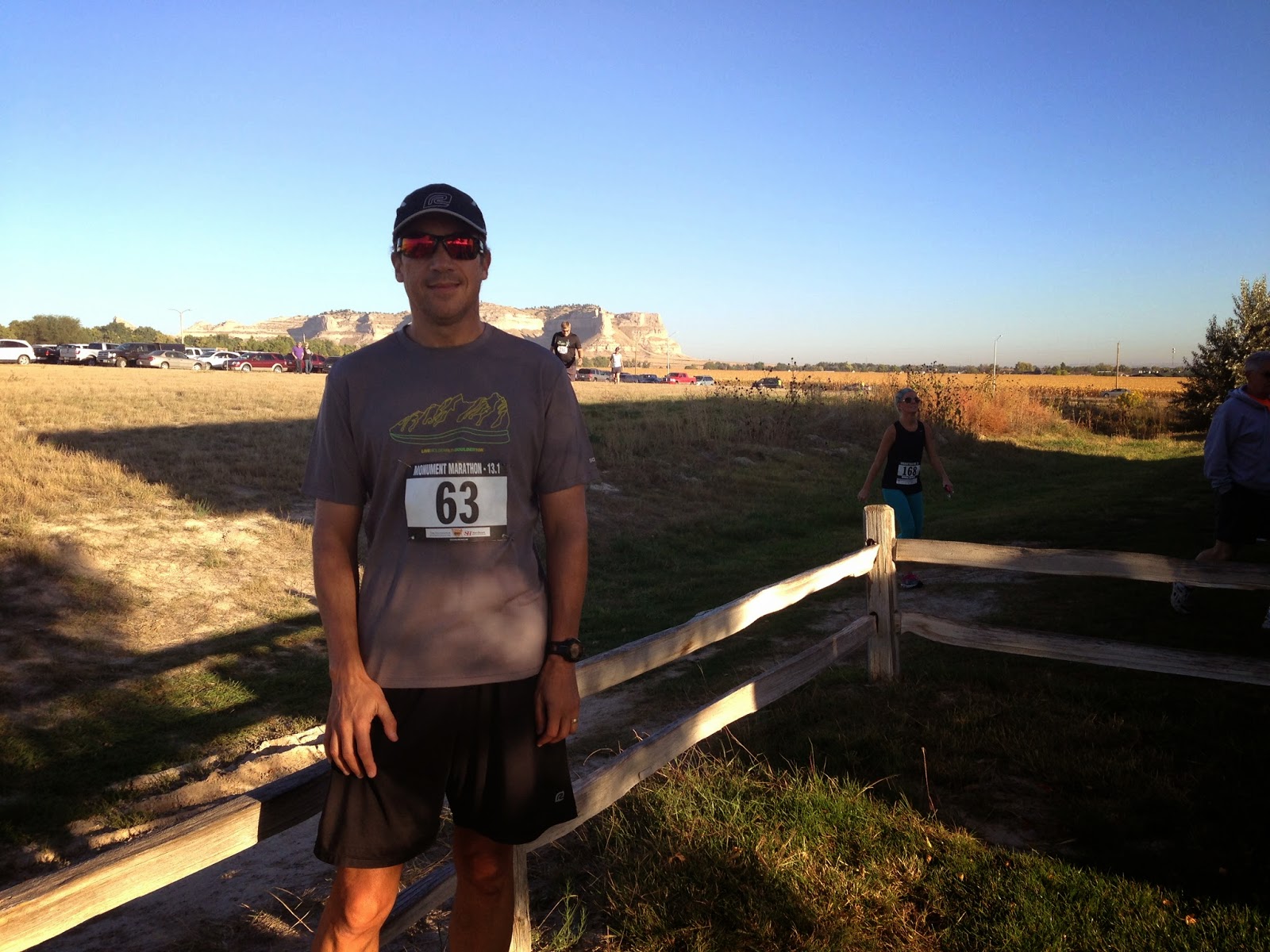 The race started and finished at the Five Rocks Amphitheater. I prefer to arrive early so we took the short 10 minute drive and arrived at the Amphitheater at 645am. Hardly anyone was there yet but I had plenty of time and space to check things out and stretch.  The race was small, only 314 half marathon runners so there were no issues with parking or bathroom lines.  The temperature was 51 degrees when we arrived and about 57 at race start. 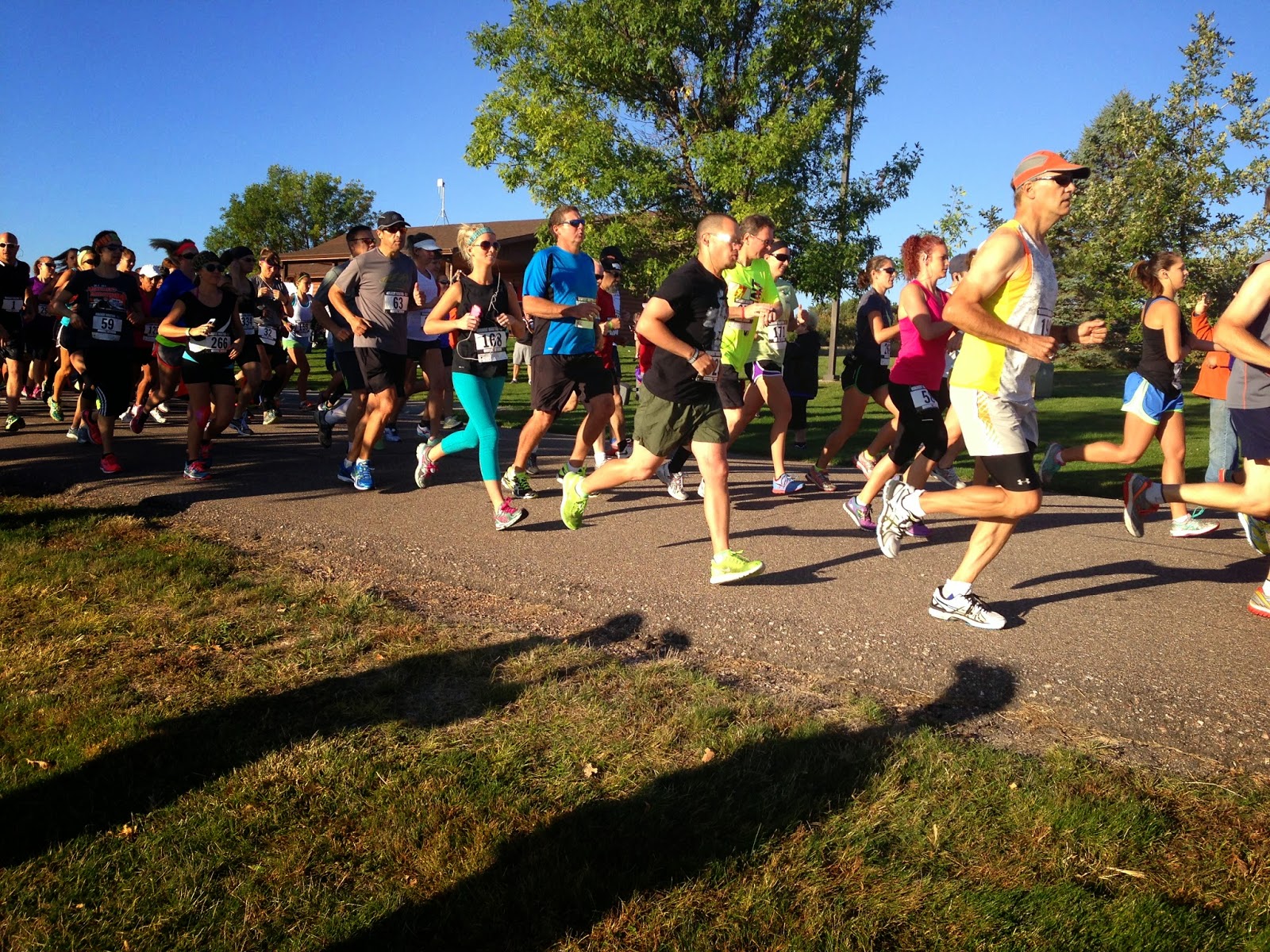 At the start, we lined up by expected finish time.  I nestled into the 2 hour group.   I knew this would be a tough course but was hoping for less than 2:10.  A few minutes before 8am a young lady sang the national anthem and we started the race.  We started out running through a trailer park and I went out fast and felt great.  Mile 1 was pretty flat and I averaged an 8:33 pace. Mile 2 and 3 were uphill (172 feet elevation gain) but with the incredible views of the Scottsbluff Monument, long horned steer, and wagon trains, the hills weren't bad at all. I averaged about 9:15 for those 2 miles.

Mile 4 and 5 were downhill (150 feet elevation drop). and fast. As I was running down the hills, I tried to use the techniques my running coach taught me. I think it helped as I averaged 8:15 for mile 4 and 8:44 for mile 5.  There was an aid station at about mile 4.5 and I stopped for about 10 seconds, drank some water and downed my first Powergel.

Mile 6-9 were on a dirt trail behind the monument.  I was a little worried about the terrain since I have never run on trails before.  At first my right knee tightened up but I focused on my running form and the scenery and all the pain went away.  These miles included some incredible scenery.  It's hard for me to describe the views of the bluffs and rock formations but they sure made the run much easier.  These 4 miles were mostly flat and I average about 8:54 per mile.  This included one stop for water and a powergel.  There were several times I wished I had a camera to stop and take a picture.  But hey, this is a race....no stopping and taking pictures!  These 4 miles were my favorite part of the run.  I felt good, passed several people, didn't see any rattlesnakes, and just enjoyed my surroundings.

Around mile 9 we went by a trailer park and then back onto pavement.  We passed a golf course and darted in and out of some neighborhoods.  I remember a nasty little hill in between mile 9 and 10.  I ran the hill but slowed down quite a bit.  It was one of my slower miles of the run (9:32).  What goes up must come down, and mile 11 sent us downhill!  This helped my pace as I averaged 8:55 for this mile.  Somewhere around mile 10.5, I stopped for water and took my 3rd Powergel. 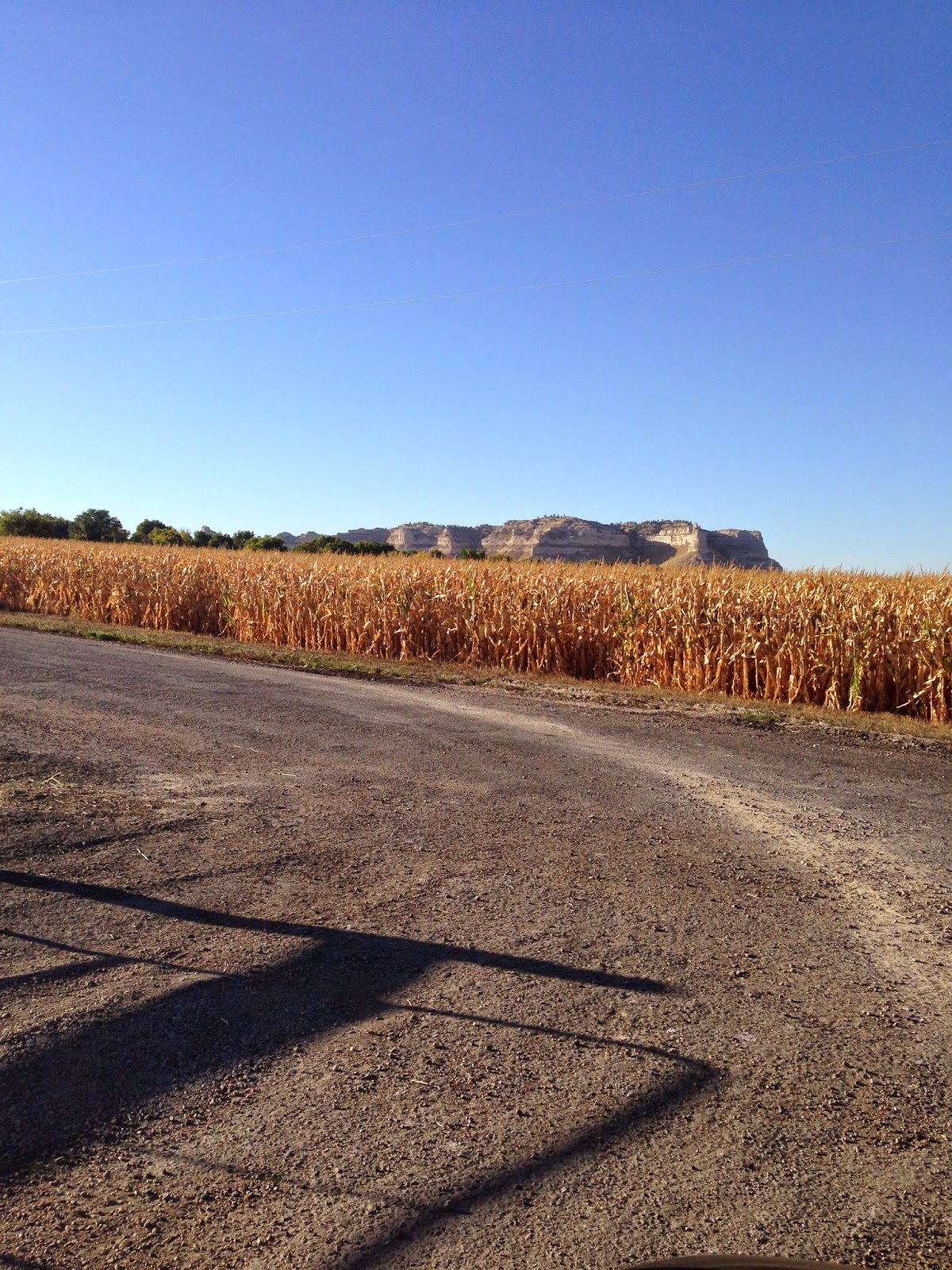 The last two miles were mostly uphill.  Nothing extreme but it slowed my pace down a bit.  I averaged 9:27 for these miles.  I remember running by corn fields and up a hill next to a cemetery.  The  last mile or so, we were back on dirt again. In the last mile, I remember a really tough short steep hill then flat for a small stretch and uphill to the finish.  Once the finish was in sight, I just sucked it up and tried to finish strong.  At the finish, they called my name and I saw my lovely wife there cheering me on. My finish time was 1:59:20. I was happy to finish under 2 hours.


The finisher's medal was cool and they had water and Gatorade for us at the finish.   Julie handed me my Hammer Recoverite and that hit the spot.  The food at the finish line was OK.  I really wasn't too hungry.  There was beer and a band playing playing in the Ampitheater after the race. We didn't hang around for awards since I knew I didn't win one.  My numbers were:

Overall this was a great event that I really enjoyed. Fan support on the course was great and in just the right places. I don't think we would have ever come to Gering if not for this event.  If you haven't seen the bluffs I would recommend a visit. 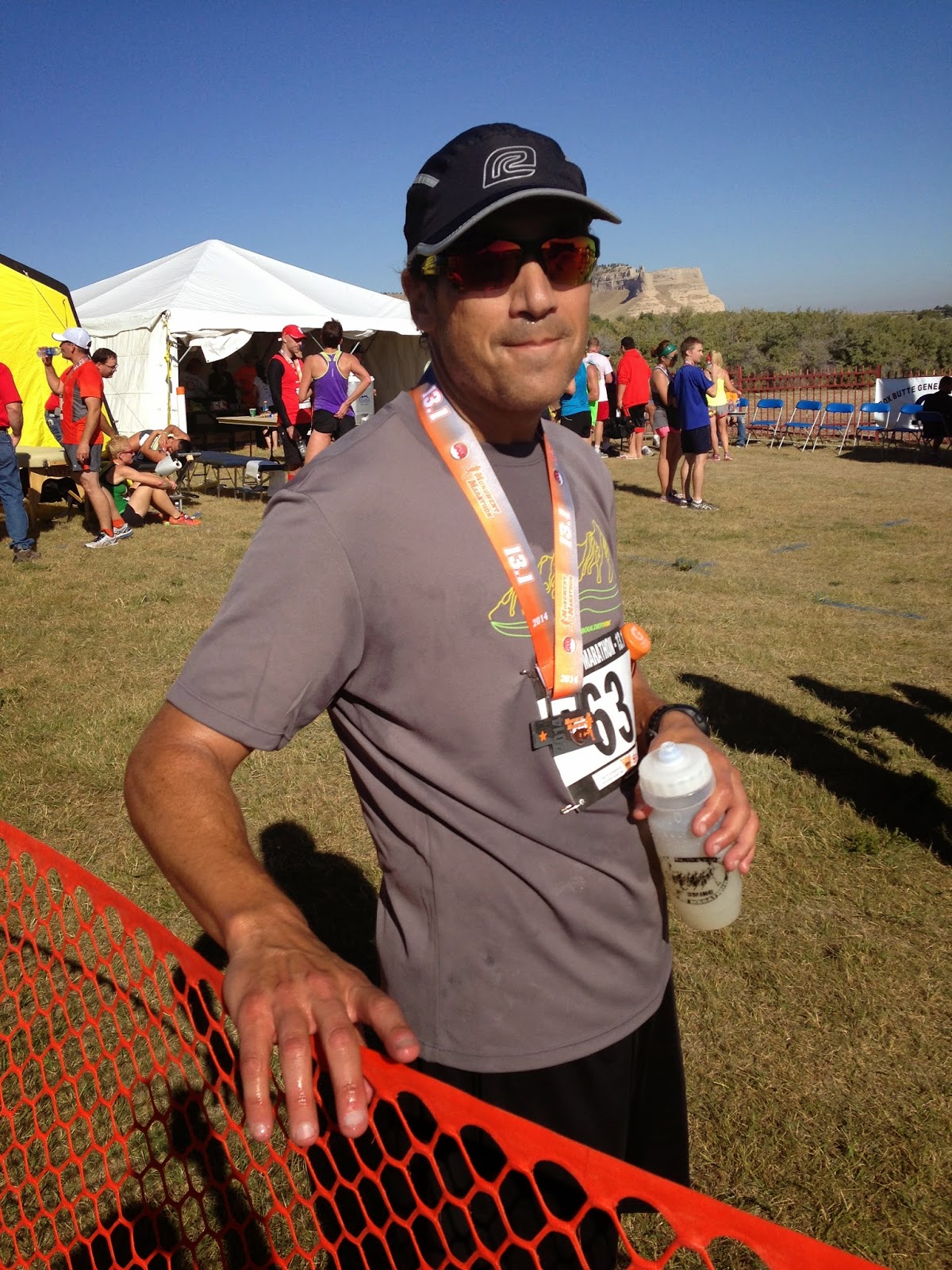 What's next for me?
October 4 - Tour of the Moon metric century ride
November 1 - Indianapolis Monumental Half Marathon  (state number 10)

Popular posts from this blog 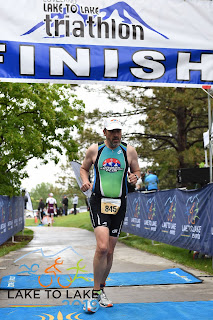 I really struggled with whether or not to write this race report.  I have bounced into embarrassment, frustration and other emotions.  Eventually I decided for the report so I can reflect on the event and put it behind me.  I had no control over the bad parts but am just not happy with my results.  Yes they could have been worse but I had high expectations with all the training I've been doing and with my new Cervelo P2 triathlon bike.

Last Saturday I completed my first triathlon of the year.  This Sprint triathlon was held in Loveland at the High School with the swim held in Loveland Lake.  Last year I did the Olympic distance and was so impressed with the event that I decided to do the Sprint this year.  For me, there was anxiety leading up to the triathlon as the weather forecast was predicting rain and high 40 degree weather.  I could handle the cooler weather but racing my new bike in the rain made me a bit nervous. 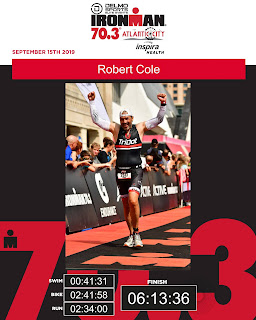 Wow, one week ago today I experienced one of the highlights of my life by joining the Ironman ranks by completing the Ironman 70.3 race in Atlantic City NJ!  This also makes the 23rd US state that I have run at least a half marathon in.

When I turned 60 earlier this year it just seemed natural to set a crazy goal.  60 is just a number but to help remember this milestone I decided to step it up and attempt an Ironman 70.3.  This race totals  70.3 miles broken down by a 1.2 mile swim, 56 mile bike ride and 13.1 mile run.  I knew it would take a bunch of training and preparation but also knew finishing the race would make it all worthwhile.  After a bunch of research I chose the Ironman 70.3 in Atlantic City NJ.  Below is my race report.  Warning, it is a bit long!

Pre-race:
Pre-race time was filled with lots of anxiety in many areas.  Rumors about the swim course had me thinking about things like:
I've never swam in salt water.  Will it make me sick?  Will it be different than swimmi…
Read more